Dr. Minas was recommended to me by my primary care physician about 10 years ago after I injured my knee playing rugby. Being a rugby player, I dismissed it, took a few aspirins, and played for another 6 years before the pain became too great to continue. I finally broke down and decided to look into MACI. I learned what I could about the procedure, and although the rehab and total recovery time seemed brutal, the technology was fascinating enough to me (as a chemical engineer) that I decided to go ahead with it. Basically, part of the reason I got MACI is because it sounded cool.
Prior to surgery, I was able to walk and sprint without too much pain, but any jogging caused me excruciating pain in my knee. This would cause my knee to swell, which would then make any movement more painful, and further increase swelling… and the cycle continued. Ibuprofen multiple times a day was part of my routine – sometimes 4 or 5 pills at a time on practice days. 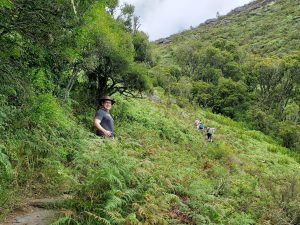 The arthroscopy was incredibly quick and easy, and I could have walked out of the operating room if I wanted. The next phase I knew would not be so easy…The MACI I got required an osteotomy as well, so determining what parts of the recovery were specific to that, and which to the MACI is difficult. Either way, there is no sugar coating it… the weeks following surgery were some of the most unpleasant of my life. I had never had major surgery before, and as an active person, sitting on a couch for weeks at a time with uncontrollable leg swelling was a private hell. Someone should contact the pope, because my wife truly deserves sainthood for dealing with me through it all. While she was working, anything I could do to take my mind off the pain and the boredom was a welcome distraction. I wrote some poetry I had been thinking about for years. I taught myself stone carving and carved a chess set. I planned and executed a live-action Clue night at my house, with me as the crippled party host. I built several massive spreadsheets to determine my fantasy football teams’ best strategies. I started writing a gratitude journal (my wife was obviously the first entry). Mostly though, I just became far too familiar with my couch cushions.
But when the day came I was allowed to start walking on my own again, the real path to recovery began, and it has been a long road I’ve still not fully finished (I am 15 months post-surgery at the time of this story). Feeling strength return and finding myself able to do small things again (walking downstairs normally, putting on socks standing up, etc) has been more satisfying than I anticipated. The biggest excitement for me though has come with being able to do the larger things again.
I got married a few months before my surgery, and with the craziness of the year, we didn’t have the time to take a honeymoon. As a result, we knew it was going to have to wait until after the surgery… Which complicated the type of honeymoon we could do. My wife and I both enjoy hiking (the western hemisphere’s most-climbed mountain – Mt. Monadnock – is in our backyard, and hiking it five or six times a year isn’t unusual) so we knew no matter what we did, I would need to be able to at least hike on it. We scheduled the honeymoon for 14 months after surgery and hoped for the best. Throughout physical therapy, I had one question that I kept asking: Will I be able to hike? My exercises focused on the muscles needed for that movement, and despite the initial atrophy from 3 months of no movement, after a year the only way to tell which leg had surgery was by the scar. I hiked Monadnock’s 2,100 vertical feet a little over a year after surgery, and though I wobbled a bit on the way down (turns out the stabilizer muscles take longer to get back, and it’s hard to stay in cardiovascular shape with gimpy legs) I made it up and down. I had passed my self-imposed first test for the honeymoon hike. 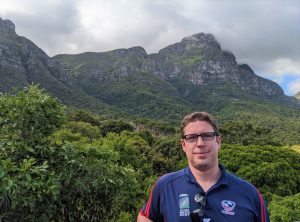 We decided to take our honeymoon in South Africa, and Table Mountain (one of the seven natural wonders of the world) is right in the heart of Cape Town. Since we were planning to be in Cape Town for three days, we decided that climbing it absolutely had to be one of our activities. It is about 50% taller than our hometown mountain, and the top is a massive plateau that can be accessed by foot, or by cable car. I had originally chosen the shortest hiking route up, but after how good my knee felt on my hike back home, we decided to take a much more scenic route that was over twice the length and covered much rougher terrain. We made a great decision, and this was truly one of the most scenic hikes I had ever taken in my life (for perspective, I proposed to my wife on Katahdin’s Knife Edge, which was previously my top pick). Many of the plants in this part of the world are found nowhere else on earth, and at times it was like hiking through Jurassic Park – only the dinosaurs were about 6 inches long and scurried under rocks when you approached. After three hours of hiking, I was exhausted, but of all the parts of me that hurt (every muscle of my legs and feet), my knee was not one. It actually felt better after three hours of scrambling up ladders, rocks, dirt paths and logs that than it did prior to surgery. I was in much worse cardio shape, no question, but my knee actually didn’t hurt. And I’m not even close to done healing. The last hour of the hike was across flat ground, and my knee “tweaked” a few times – like it did coming down Monadnock – but it was because I wasn’t paying as much attention to my steps, and my muscles were exhausted and not stabilizing as well. That’s what I’m working on improving now.

I started finally jogging on a treadmill last week, and I’m up to a half-mile (at 10-minute mile pace) at a time. It’s still sore, it’s a little wobbly, but it’s encouraging, and I can’t wait to see what successes the next year brings. Thank you Dr. Minas and the Paley team for all you’ve done!

And I promise, no more rugby. Probably.