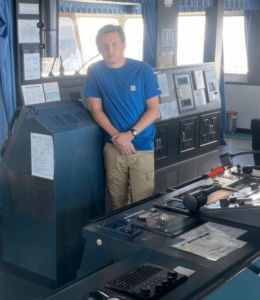 I wanted to write you and thank you for the care you and your team gave our son, Mitchell.

He had some “minor surgeries” over the years, but in 2011 you performed a femoral and tibial lengthening surgery on him. During that summer we moved to Jupiter so we could have all the physical therapy and follow up done there. Even as an experienced anesthesiologist, I was somewhat shocked at the amount of surgery and PT required to recover from this operation. As a Navy veteran, I never imagined that he could pass a military physical after all these leg operations so I believed the military was off the table as an option for him in life.

In the intervening years, he was able to mountain climb with Boy Scouts in Philmont, New Mexico and hike the mountains in Montana elk hunting with me as well as become a very good scuba diver.

However, in 2019 we saw you for a clearance evaluation as my son wanted to apply to the U.S. Merchant Marine academy which requires a Congressional Nomination and to pass the standard military physical. Thanks to you and your team’s effort, he was able to pass his physical and subsequently was granted an appointment to the Academy. He has now finished his first year and is on his first deployment on a cargo ship for three months.

I know the last year has been very difficult for everyone so I wanted to update you on one of your success stories. Even though you haven’t heard from us lately, we remain grateful
you were able to help our son.